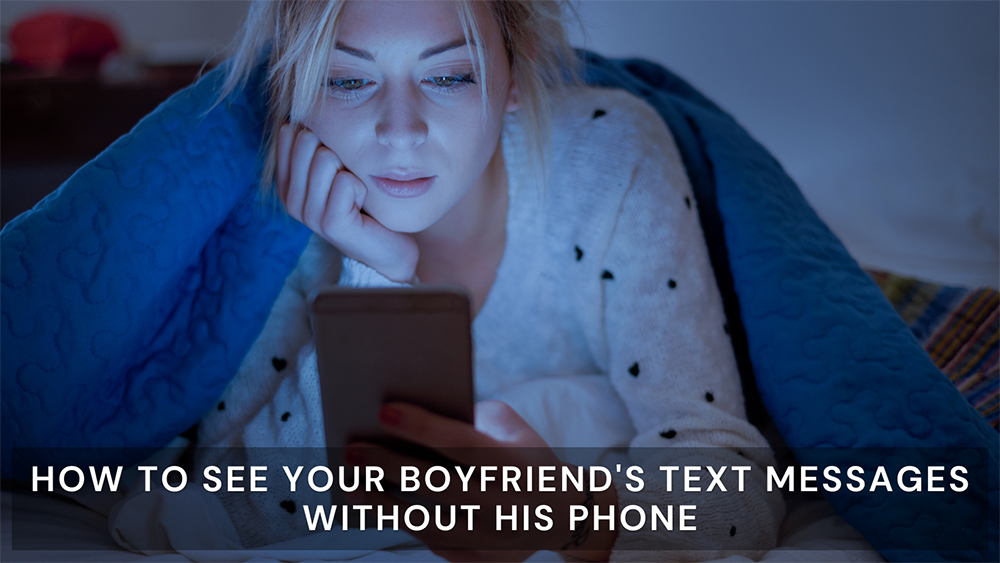 If you want to see your boyfriend's text messages, it's important to understand your reasons and why you feel compelled to read his messages. If it's out of simple curiosity, the easiest method is the most obvious. Simply ask him for his phone. This might not be the most subtle approach, but it will definitely get the job done. If he's anything like most guys, he probably won't even think twice and will hand it over without a second thought, just assuming you want to look at something.

If you have more serious reasons for wanting to see your boyfriend's text messages without his phone, such as suspecting he's cheating on you, then you'll need to be a little more creative. If this is the case then you will want to put a spy app on his phone.

Before we get into using a spy app to read your boyfriend's text messages without his cell phone, we need to discuss the legality of doing this. In many jurisdictions, it will only be legal to do this if you own the device. However, there are some locations where it will be illegal to do this at all unless you have his consent.

We strongly recommend consulting with a lawyer before taking any actions or using the software discussed on this page. Failure to do so, and assuming that he won't prosecute you or that you are legally within your rights, may result in severe penalties.

5 Apps To See Your Boyfriend's Text Messages Without His Phone

There are several spy apps that will let you read your boyfriend's text messages without his phone. Some of these apps will require you to jailbreak or root his phone, but there are also some that don't. For simplicity, we'll focus on those first.

mSpy is one of the most popular spy apps on the market today. In addition to the ability to read your boyfriend's text messages without his phone, it also has a wide range of other features.

The app uses GPS tracking to let you see where your boyfriend is at all times, so you can not only see where he is now but also a map of where he has been.

Most cheating boyfriends will be smart enough to not use regular SMS text messaging, but will place too much faith in the security of 3rd party social media apps like Telegram or WhatsApp. mSpy can intercept all those messages as well, letting you see everything he's saying.

mSpy is one of the most commonly used monitoring apps, so compatibility and tech support are excellent.

uMobix is another popular spy app, with a lot of features similar to mSpy. uMobix also offers GPS tracking, social media message interception, and the ability to see your boyfriend's text messages without his phone.

What sets uMobix apart is its ability to turn on the microphone and activate his camera at will, effectively turning his cell phone into a live streaming webcam.

uMobix takes about 5 minutes to install and will then enter stealth mode. After that, you will not need to access your boyfriend's phone again and will be able to see his text messages, as well as everything else on the target phone, via a web-based control panel you can view on your own device.

It is more expensive than mSpy, which is why it is second on this list, but if you need the extra monitoring capabilities it is well worth the extra money.

Compatibility is excellent and tech support is available 24/7.

One of the things that set Eyezy apart from other spy apps is its ease of use. The app just came out in 2022 and it is designed to be very user-friendly, so even if you're not tech-savvy you should be able to figure it out without any problems.

Installing the app only takes a couple of minutes and once it's installed it will enter stealth mode so your boyfriend won't know it's there.

Eyezy offers all the standard spy app features like GPS tracking, social media message interception, and the ability to see your boyfriend's text messages without the target phone.

What sets it apart is its low price and the fact that it doesn't require you to jailbreak or root the device. That makes it a great option if you're on a budget or if you're not comfortable with taking those sorts of risks.

Can I read my boyfriend's texts without installing anything on his phone?

No, you will need to install a monitoring app on your boyfriend's phone in order to be able to read his texts without his phone. There is no way around this, as the app needs to be installed in order to work.

Do I need to jailbreak or root my boyfriend's phone?

How much does it cost?

The price varies depending on which app you use and what features you need but, generally speaking, you can expect to pay around $30-$50 per month for a good quality spy app. Some are more expensive, and some are less expensive, but that is a good ballpark figure.

Will he know I have seen his text messages?

No, he will not know you have seen his text messages if you use a spy app. The app will be installed in stealth mode so he won't know it's there, and all of the data will be sent to you via the internet so he won't be able to see traces of the activity on his phone.

What if I need help?

All of the apps listed above come with excellent tech support, so if you have any problems or questions they will be more than happy to help you out. You can usually contact them via live chat or email, and in some cases by phone.

Do these apps really work?

Yes, these apps really do work and they are becoming more and more popular as people realize how useful they can be. If you think your boyfriend is cheating on you then installing a spy app is a great way to find out for sure.

It is worth reiterating that using a spy app to see your boyfriend's text messages without his phone is only legal in specific situations and what those situations are varies widely by state and jurisdiction. Consult with a lawyer before taking action and do not assume that it will be OK.

Seeing your boyfriend's text messages without his phone can be a great way to figure out if he's cheating on you, but it's important to make sure it's legal in your state or jurisdiction before taking action. There are many different spy apps on the market, but the three mentioned above are the best methods for being able to see your boyfriend's text messages. You will want to choose what method you use based on the other features you would like to have available. All three of these methods are very user-friendly, have excellent tech support, and will get the job done quickly and easily.