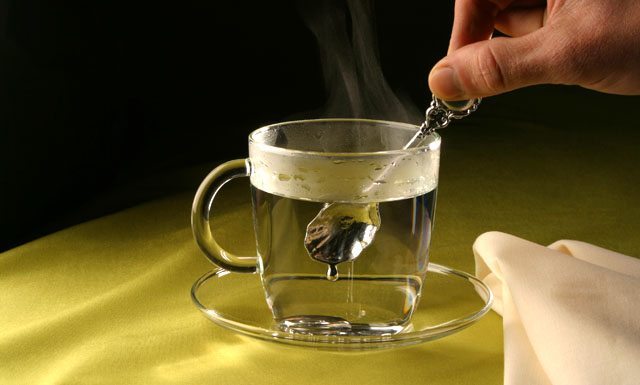 The gallium spoon trick is how most of us first become acquainted with the element. The prank involves creating a spoon out of the metal and watching in giddy amusement as your friends are shocked, amazed, and a little freaked out when they try to use it. How does the trick work? First, let’s check out the really cool metal gallium!

Gallium is one of those elements that should be in every chemistry set for kids, because it’s just about the coolest metal there is. In solid form, pure gallium looks almost like aluminum and is not very impressive. But what makes it special is that the melting point of gallium is only 85.5 degrees Fahrenheit.

As it so happens, that is right between normal indoor air temperature (around 73 degrees) and normal human body temperature (98.6 F). So, it can sit on a desk all day long as a lump, but it will start to melt when you pick it up and hold it in your hand. Which means that you can make people think you are superman and can melt metal with your bare hands!

Gallium exhibits an orthorhombic crystal structure, which looks a little bit like a rectangular prism.

If you look closely under a microscope, you should be able to see a fractal pattern to the crystals. If you can cool the gallium more slowly, more perfect crystals should be formed which will result in a larger and less disturbed fractal pattern.

Because it melts at such a low temperature, it has a tendency to crystallize quickly. You can watch liquid gallium crystallize in real time with a USB Microscope.

Although the melting point of is impressive, but its boiling point is too, at over 4,000 degrees Fahrenheit!

Gallium attacks other metals and expands by 3% when it becomes solid.

Unlike Mercury, it does not just join together in progressively larger blobs when it is in a liquid state, it “pops”!

The secret behind the prank is gallium spoon’s melting point, which is quite low. It begins to liquify at 85.5 Fahrenheit, which means that even holding it in your hand will do the trick. What does this have to do with magic spoons? Well, it means that if you make a spoon with it, it will be solid in your silverware drawer, but will start to melt almost instantly when you use it to stir warm tea. The best part of the trick is that it is not toxic, so you can serve your friends a cup of tea with a disintegrating gallium spoon and still have them alive to laugh at the joke!

Since it is made out of metal, it will look and feel normal. The only difference is that it has a low melting point, and that they have never seen a spoon like this before. 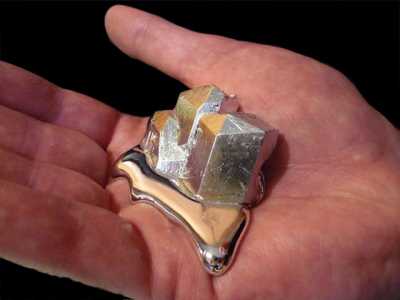 After creating a spoon using a special mold, grab a glass of water that is heated to at least 90 degrees Fahrenheit, and you’re good to go. When you’re ready, just stick the spoon in and stir. After a couple of seconds, it will begin to melt and drop blobs of melted gallium to the bottom of the glass.

To recover it, just put the glass in the refrigerator. When cool, it will re-solidify and you can pour the water off and reclaim it to be used again and again.

Gallium spoons can be a little tricky to make because it does not behave like a typical liquid or a typical solid. The easiest way to make a spoon would be to use a chocolate spoon mold, but they just do not form a tight enough seal to do the job as it melts. At best, the spoon will be imperfect, and at worst you will have a drippy mess.

Rotometals has a mold that can be purchased directly from Amazon (link below). The kit contains everything you need to make two gallium spoons including the mold, hardware, instructions, syringe, backing plates, and the very important 50 grams of gallium.

The kit is reusable, just be sure to cool off your gallium when you are done messing with your friends so you can save it for next time.

There are a lot of choices of gallium for sale through Amazon. The price per gram depend on the amount purchased as well as the purity. The links below are what we selected and would recommend as the best choices to buy the highest purity.

While this is a fun prank to pull on friends, take care not to allow your friend to actually eat or drink whatever you melt the spoon in. While gallium is considered non-toxic, consuming any sort of metal is generally a bad idea. Besides, if you let them eat it, you will only have to buy more!

Do you have any other ideas for using gallium to prank someone? Be sure and let us know. We’re always looking for cool new ideas or experiments, and humorous things to do when bored.

Posted In
Science
About The Author

Deanie
Gardenia Boyle, aka "Deanie," is a freelance writer from Seattle. When she's not busy working on a variety of writing projects, she enjoys volunteering at the Humane Society or hiking. If it's raining though, which it does a lot of in WA, you'll probably find her with a controller in her hand playing one of her favorite games, WoW or Final Fantasy.
Follow Us
Follow us on Facebook! 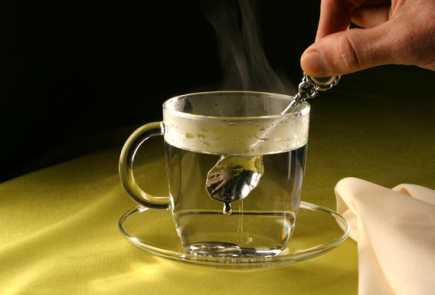